City Teams Get CPR Training, Given AEDs by Sunshine Toyota

High school football players are trained and are given the equipment to win a football game each Friday night on the field.

Now, a group of Battle Creek high school football players have been trained and have been given equipment to win in the game of life on Friday nights, or any other day, there might be a need.

Through the group Athletes for America and through funding locally by Sunshine Toyota, city football players were recently given training in CPR and the city schools have been provided with Automated External Defibrillators (AED) in an effort to save the life of a teammate if needed.

With 160 city football players signed up to participate, Athletes for America met with members of the squads from Battle Creek Central, Lakeview, Harper Creek, Pennfield, St. Philip and Marshall to go through training last week at First Wesleyan Church. The group, with the help of the PrideCare Ambulance Training Center, learned how to do CPR and learned how to use the new AEDs that will be donated to each of those six schools by Sunshine Toyota.

“We learned how to do CPR if one of my teammates needs helps. This can help a lot. If anyone ever goes down, I feel like I can save a life or help them out,” said Donnie Ernsberger of Lakeview. “The AEDs are a pretty nice piece of equipment. If anyone goes down, it’s nice to have that there to use. It’s a real nice thing they are doing for the schools.”

According to Athletes for America, every three days an athlete dies from Sudden Cardiac Arrest. The founder of the organization, Billy McGehee, hopes to use high school and college athletes to create a new large group of people who are at the ready and are equipped to save lives when needed.

Gary Minneman Sr., owner of Sunshine Toyota in Battle Creek, met McGehee at a function in Florida recently and was excited about his efforts and wanted to bring the group to Battle Creek.

“It’s so important that we all know how to take care of somebody if they have a medical emergency because a first responder won’t be there necessarily at the time and we have to do the first thing to save a life,” Minneman Sr. said. “We are excited Sunshine Toyota could provide each of the high schools an AED so they could have them in the field.”

McGehee has a background in athletics that includes being a former world-ranked pro tennis player and being the former president of the Tampa Bay Lightning as well as being on the executive board of the Orlando Predators of the Arena Football League.

He says he was inspired to help educate people to be first responders after the events of 9-11.

“I asked myself, how can we use the next generation of athletes and the power of sports to raise the awareness of emergency situations,” said McGehee “We decided to train a few, a few turned into a dozen, a dozen turned into a hundred, a hundred turned into a thousand and now a thousand has turned into tens of thousands. The mission is simple, can we train every high school, college and pro athlete in America in the life saving skills of CPR and how to use an AED – 7 million of them – and put them in a network of people who will be at games and at practice fields every day to help save lives.”

The local high school athletes went through the training last week, using CPR training dummies and getting involved in the use of the AEDs. They were able to learn how to operate the AEDs, which amounts to turning it on, putting the attachments on the right place on the person in need of help and then following instruction by the instrument as to when to shock the person suffering from Sudden Cardiac Arrest.

The draw for the local schools seemed obvious as athletic directors and athletic training staffs can always use some help with equipment and training. Especially in the light of a recent tragedy not too far away from home when Wes Leonard of Fennville died on the basketball court just last year.

“Some schools already had some AEDs, but you don’t ever have enough. Now a school can have one at a practice at one location and have another at a game at another location, or with a trainer,” said Pennfield Athletic Director Larry Boyer. “Coming off the situation with Wes Leonard dying and with the knowledge that he might have been saved if there was an AED on hand or if someone knew how to use it properly, it makes sense.

“Anybody can do it, AEDs are easy to use as long as you know how and it’s good that our kids will know how now.”

Sunshine Toyota has ordered the AEDs, and is in the process of giving them to the six schools. They will also be making a formal presentation to the schools at several games during halftime this season.

“I really appreciate the local businesses who support the local school districts in Battle Creek. Sunshine Toyota is one of many who are very helpful. The event was good to educate students and coaching staffs with safety concerns related to athletics, ” BCC Athletic Director Michael VanHoven said.

The local organizers were excited about the involvement of the local schools and the football teams. Gary Minneman Jr. also of Sunshine Toyota, is hoping to expand the program in future years.

“Everything is about money these days of course. We were happy to provide the funds, provide the AED and to get Billy’s team to come in here to get them trained,” Gary Minneman Jr. said. “The key was to get the schools involved. Today we have football teams out here and going forward, we hope to get more sports involved.” 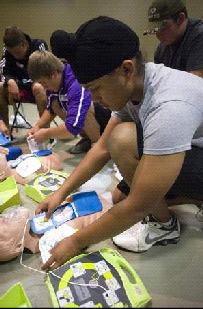 Karmen Mundeo, Lakeview junior, learns how to properly use an Automated External Defibrillator, also known as an AED. / Nick Garrison/For the Enquirer 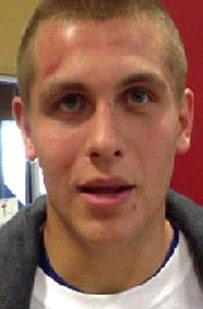 High school football players in Battle Creek were trained in CPR and how to use AEDs, which were donated to all the schools by a local business.

“We learned how to do CPR if one of my team mates needs help.” Donnie Ernsberger from Lakeview High School Football 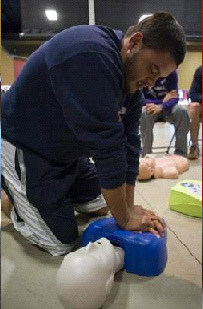